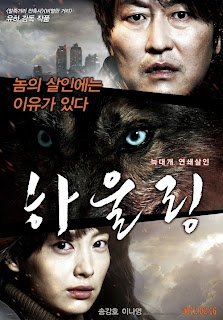 Is it action, drama, suspense, or supernatural thriller? Howling (하울링) certainly feels like all of the aforementioned at times, which leads me to my point; this is a mixed bag on so many levels. You can't win 'em all Song Kang-ho.

Detective Sung-gil (Song Kang-ho), has been around the force for quite some time. There's not a lot he hasn't seen or dealt with and quite frankly he's ready to move up in the world and is looking for his big promotion to captain. However, his movement to the top appears to get sidelined when his boss sticks him with Eun-young (Lee Na-young), a driven female rookie detective who simply wants to do the job right. They're assigned to a case in which a man catches fire spontaneously while sitting in his truck in a parking garage. They find out that the fire stemmed from his belt-buckle, which was fitted with a timer and a chemical to ignite at a specific time. Pretty elaborate stuff. The coroner, upon examining the body, informs the detectives that he found deep bite marks, from what appears to be a dog, on the man's leg. We find out the victim was into gambling and drug-use which leads Sung-gil and Eun-young into following the drug trail. The drugs lead them to a low-life's home in which they discover a secret area where young girls are being pimped out. What had appeared at first to be a case of accidental death has lead these two to much darker places. Meanwhile, someone is attacked on the street by the dog and the police now know that the first victims bite marks are more than coincidental. Things seem to be moving forward in the investigation but Sung-gil decides to keep his and Eun-young's findings to himself and not report it to the Captain or the other officers, much to Eun-young's dismay. Sung-gil feels that if he can solve this case without assistance, then he'll surely be promoted. As you can imagine, this selfish style of police-work backfires on him and both Sung-gil and Eun-young are reprimanded, with their credibility taking a hit in the process. As if things weren't bad enough with her coworkers, Eun-young has to deal with being the only female in the group and these guy's stop at nothing in making her life as uncomfortable and inconvenient as possible. Sung-gil eventually starts warming up to his partner but does his best not to show it. We learn that Sung-gil isn't such a bad guy when we get a look at his family life. He doesn't exactly have it easy himself. So with this second victim, dead from an attack by what forensics are now saying could be a wolf, the team are trying to figure out where to find this animal and where it could possibly strike next. A connection begins to develop between the victims, as they all appear to have ties to child prostitution and drugs. The wolf is taking them out one by one! Sung-gil and Eun-young begin to question private dog trainers, as well as officers that work with dogs in order to find a suspect but their search comes back empty. Eun-young get's a bright idea in her search and comes back with the name Kang (Jo Young-jin); a name that changes their investigation completely. Who's using this wolf-dog as a murder weapon and why? What is their connection? Can Sung-pil and Eun-young find this animal before it kills again?

A dog as a murder weapon. I personally can't say I've seen that before in a movie, but now that I have, I can say that there's probably a reason for that. It's all a bit silly. Howling gives us this fairly unique concept and delivers it in a muddled, overly melodramatic way. I have problems with the execution of how the story unfolds here because there are times where I wondered if the dog was some sort of supernatural being. That's how amazing this animal is or is at least presented. It seemingly comes out of nowhere and it seems to be able to do things even Lassie would be envious of (I'm thinking mostly of the movie's ending for that reference). To me, it all just rang a bit too fantastical and I never really felt a connection with the dog, as other characters in the movie clearly did. Now I love Song Kang-ho, he's my favorite Korean actor, and he's as sharp as ever here, even if his character isn't exactly the most likeable. Therein lies another problem for me with this film; I had a hard time liking any of the characters, aside from Eun-young. Lee Na-young does a great job at conveying the struggle her character goes through in being the sole female on the force, the adversity tied in with that and in general, just being a sympathetic character to root for. However, the police force, Sung-gil and Eun-young's coworkers if you will, are completely deplorable, detestable characters. I didn't care about any of them, one bit, other than to see them humiliated. In true Korean cinema fashion, these guys are made to look buffoonish, irresponsible and incapable, as well as immature and over-the-top sexist. The way they treat Eun-young was quite shocking for me, making me hate them and I found them to be almost villains for Eun-young's character. Yeah, that bad. As much as I liked Eun-young's character, I found some glaring inconsistencies with her behavior. Look no further than the scene where she goes to investigate Kang's home. This is a by-the-book, straight-shooter detective that breaks all of her own rules just by being at that house. It bothered me. The story-telling is quite intriguing in the first half of the movie, especially as you unravel clues with the detectives, but for me, the end result and the big reveal just didn't do anything for me. I felt it just lost that spark of intrigue from the first half and didn't have any impact.

Howling was a disappointment for me because it felt like a movie that didn't know what it wanted to be. The crimes within are horrible and incredibly dark, yet there are moments where the proceedings just seemed laughable. Check it out if you're a fan of the main stars (as I am), but it was a little too campy for my taste. (Lee)

Jason
Konnichiwhat!? exists so that my friends, family and maybe even strangers, can stay up-to-date on my life in Japan.