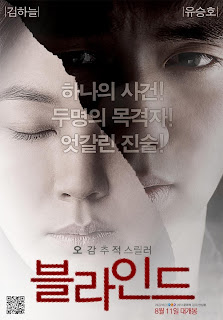 I'm going to try and stay as unbiased as possible in reviewing Blind (블라인드), because yes, it has my favorite Korean actress Kim Ha-neul in it. Not factoring that in though, what we have here is a pretty good suspense-thriller that asks the audience to suspend some disbelief in order to achieve maximum entertainment. I was able to do that and walked away fairly entertained.

Police cadet Soo-ah (Kim Ha-neul) is an angry woman when we first meet her. Why? Because her younger brother Dong-hyeon (Park Bo-geom), is at the club again preparing to enter a B-Boy dance competition with his friends. See, he promised to stop this hip-hop dancing and yet here he is about to shake his groove thing again and Soo-ah ain't havin' it! She drags him out of the club, going so far as to handcuff him to the handle on the inside of her van so he doesn't try to run off. The two are arguing during the drive home, with Dong-hyeon reaching for the handcuff keys and Soo-ah trying to stop him. You get the picture...this is not what you should be doing while driving. Sure enough, they get in a pretty horrible accident, where the van is left teetering on the side of the freeway overpass and Soo-ah thrown from the van, laying bloody in the road. Dong-hyeon cries out for his sister's help, but she's unable to make her way to him, her vision horribly impaired. The van tips over the side and a truck crashes into it, ensuring Dong-hyeon's death. The two were family, but not by blood, as they were both raised in the same orphanage. Time passes and we see Soo-ah trying to adjust to her new life as a visually impaired person, with her seeing eye dog Seul-ki. The police station can't employ Soo-ah again, and they claim it has nothing to do with her eyesight, or lack thereof, but more of the fact that she used handcuffs on her brother, resulting in his death. Basically, life is pretty bad for her right now. We oversee/overhear on the news that there is a killer on the loose, taking young woman at night and doing unspeakable things to them. When Soo-ah is waiting for a taxi home one night, she gets in the cab and soon realizes that the driver's (Yang Yeong-jo), behavior is quite abnormal. He says he'll take Soo-ah home even though she doesn't have enough money for the deluxe cab fare. Nice, but a little sketchy. He's persistent on giving her a complimentary coffee and having her drink it. Weird and suspicious. The cab smells like sterilizer. Just weird. While trying to get Soo-ah to drink the coffee, he's not watching where he's going and hits a woman crossing the road. He tells Soo-ah he hit a dog, but when he gets out of the cab, he puts the woman's body in the trunk. Soo-ah is certain he didn't hit a dog and the driver becomes aware that she's onto him. He tries to attack her but Soo-ah is able to fight him off long enough, because another car starts to show up and the crazy dude drives off, leaving Soo-ah on the side of the road.

Soo-ah speaks to the police and tries to convince them that just because she's blind, it doesn't mean she can't give them valuable information. Inspector Cho (Jo Hee-bong), decides to give her the benefit of the doubt and hears her out. Also, a young man Gi-seob (Yoo Seung-ho), comes forward claiming that he saw the accident that night but the information he gives Inspector Cho conflicts with the information provided by Soo-ah. Meanwhile, this killer is still on the loose, taking young women, torturing and killing them. To make matters worse, he's aware that Gi-seob saw him that night and he also has Soo-ah's contact information from that fateful night in the taxi. Soo-ah and Gi-seob can't seem to get along, but they both need to work together because the killer is out there and knows how to find them. Can Inspector Cho help these two get along and put all the pieces together in order to catch this psychopath?

How about that for a premise!? A visually impaired young woman, with some police training, has to work alongside a young punk and a somewhat bumbling inspector in order to catch a deranged killer. Blind gives us a far-fetched premise but presents it in a way that seems somewhat plausible. That's something I can always appreciate in a film. Even if I'm expected to not believe what's going on, try and make me believe it. I tend to appreciate the effort. Take your material seriously and I'll try to take it seriously. You get what I'm saying. You know I love Kim Ha-neul at this point, and for me, she doesn't disappoint here. She does quite a respectable job playing someone with a visual handicap. It never comes across as phony or laughable, so kudos to her for that. She's proven time and time again that she has great range and isn't just the comedic actress she started off as. Jo Hee-bong, I found out, wasn't always an actor and got his start as a stuntman. I have to say, he does quite well here as a goofy, but charming, detective that you root for. Yang Yeong-jo, as the nutty killer Myeong-jin, is excellent at playing an angry, demented lunatic. This guy is really intense and does at a great job at creating that intense air in a scene where you have no idea when or how he's going to snap. You see this dude, you know something's going down. Speaking of which, there are some really intense scenes in Blind, especially one involving the subway system and what felt like a great commercial for the use of Apple's iPhone. Soo-ah and Gi-seob use their iPhone's in this scene involving Myeong-jin and it's not only intense, but pretty darn cool too. That being said, I did have some gripes with Blind. My biggest problem was that while Myeong-jin was great at playing this incredibly driven killer, he was also damn-near unstoppable. I mean this guy was like the Terminator at times and it had me thinking on more than one occasion, "ummm, what the...? how is he not dead!? He is just human right?" I was also annoyed at how, yet again, the police force come across as incompetent nitwits. I find this more of a problem with Korean films as-of-late, more than as a problem with just this film.

Blind is a suspense-thriller that hits all the marks in most cases. The characters are likeable, the villain is detestable and there are some real nail-biting moments. Some ideas are far-fetched, but this is a movie for crying out loud. Suspend some disbelief, sit back and firmly grip the side of your chair. Now you're ready to watch! (Lee)

Jason
Konnichiwhat!? exists so that my friends, family and maybe even strangers, can stay up-to-date on my life in Japan.